Title should be self-explanatory.
What does your setup look like?
Is there anything you want to change? Or are you looking for advice for possible changes?

I shouldn’t need to mention this, but keep it civil. Tastes are different. 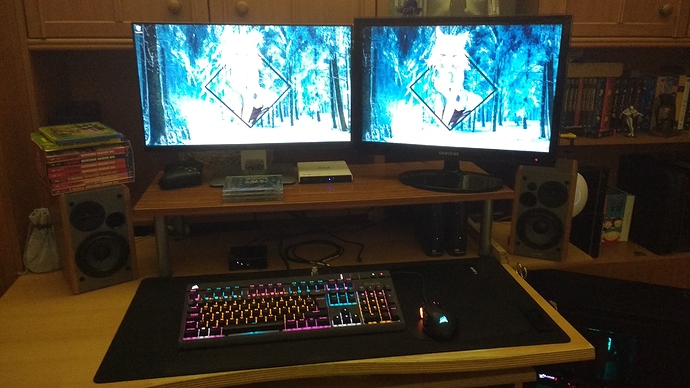 Luckily I cleaned my desk yesterday

The thing I don’t like the most about this setup is the left most monitor, it takes up way too much space on the desk and has many other issues. I want to eventually replace it with something smaller and less broken but It was going spare and works alright so might as well use it. Other than that don’t know of much I’d change about it. 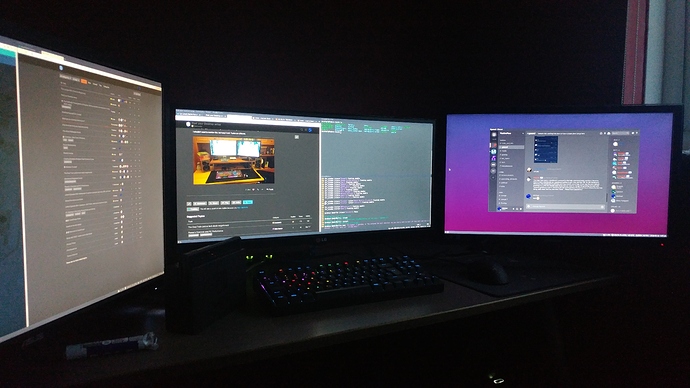 Shall we include the specs and make a “no dark rooms with only the monitors lit up” rule?

Can do if you want, had to take it in the dark because its too late for natural sunlight and light in my room makes the photo look too grainy, plus I still do like the dark room. 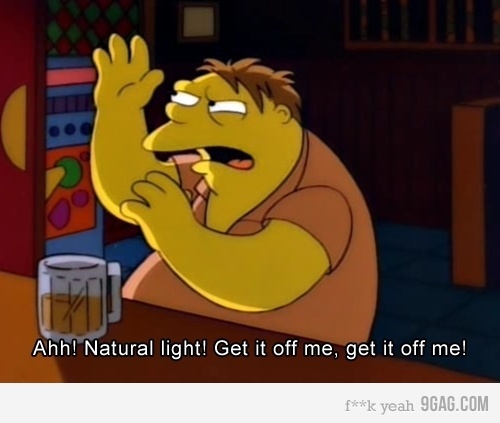 kek don’t mind natural light its artificial light that gets me.

its artificial light that gets me.

Got 2 fluorescent tubes in my room. They’re bright (one is usually enough). Over the years I got used to them but that cold kind of light is not what I prefer. I keep my shades down and curtains closed, so they run all day. During night I turn on my desk lamp (which I use as a bedside lamp pointed towards the ceiling) or just the small decorative lamp behind my desk (which has a nice, warm light…but you can’t see shit with it). 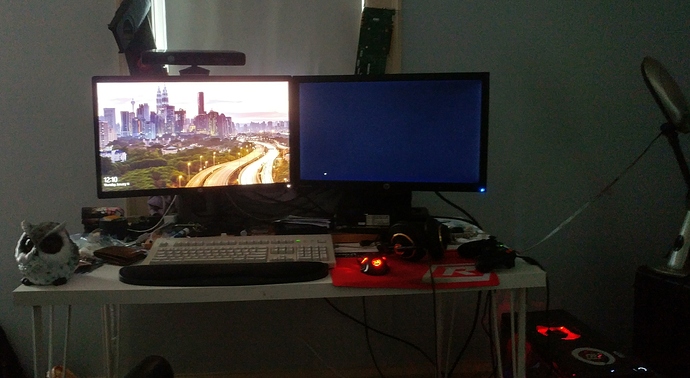 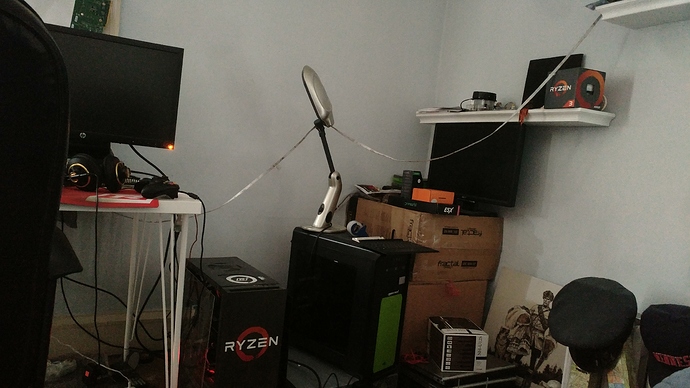 Edit;
Oh also my collection of old school games, and some mechanical keyboards and bed. 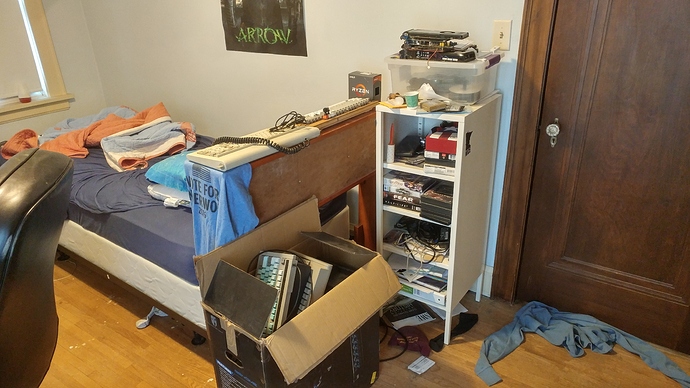 And my other keyboards and random x79 hardware 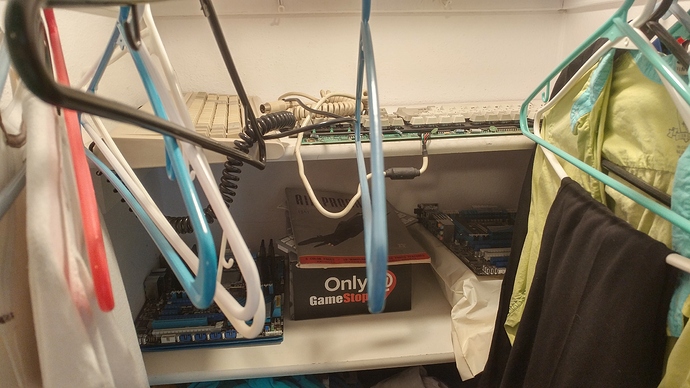 Isn’t a desktop setup but might as well post it as its somewhat interesting. I eventually plan on making a forum topic about my setup and other networking related stuff but that will come a little bit later. The bottom system is my server that this forum is running on, it runs CentOS 7 has an i7 4770k and 16GBs of Memory on a Z97 motherboard. Other than the forums its mostly used for network file storage.

Above that is my pfSense router, its a fairly low power system but handles my routeing and firewall needs like a champ. Its running on an AMD Athlon 5350 AM1 CPU which is great because it isn’t susceptible to meltdown

Then is my patch panel and network switch which is a TP-LINK JetStream T1600G-28TS and handles all the main switching for the network and breaks out to a couple of dumb switches.

The top system is temporary also running pfSense as I plan to do some maintenance on my production router soon. It has a 4690k on an ATX Z87 motherboard inside a M-ATX case that I recently modded to fit the motherboard. 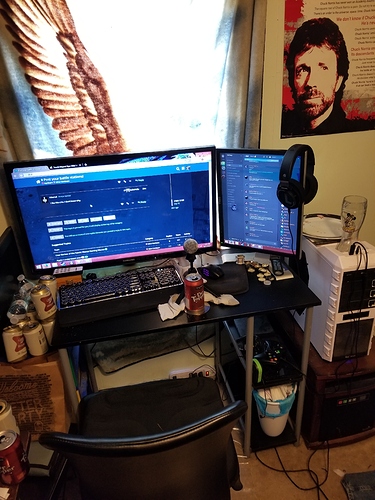 32" Samsung 1080p smart tv
Some dell that was in the house when I bought it, only one I have that can go portrait and I use it for discord mostly so the parts that are fucked on it don’t bother me

Hopefully I get to upgrade it next year sometime, I need a car first because Priorities ugh

Ooh, I remember that one. Didn’t a lot of people give you shit for the empty cans and glass+plate on the PC?

That’s maybe 2 days worth? And I don’t feel like cleaning it every day so meh

I don’t see the problem with that, keeps dust from going in and it’s a nice flat spot to set the plate when I’m done eating. It’s about the best use for that case since it’s terrible at holding the pc lol

Trashcan next to the desk -> instant clean-up.

it’s a nice flat spot to set the plate when I’m done eating.

You monster! Just put it on the bed like everyone else 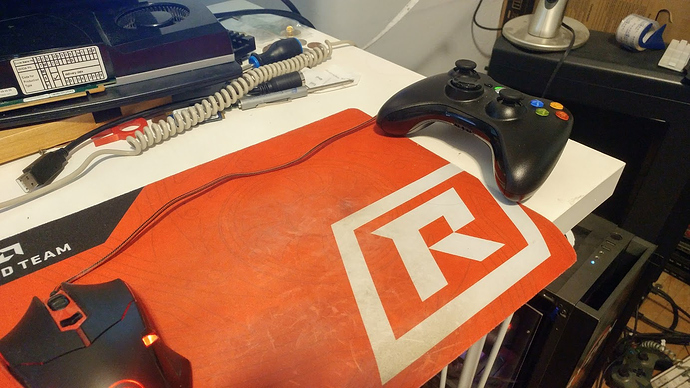 Trashcan next to the desk

I’ve got a little one in the desk for stuff like napkins, small wrappers, etc.

Cans I don’t care about lol. Come in with a bag every now and then to collect them all at once, good enough for the girls I go out with ¯_(ツ)_/¯ 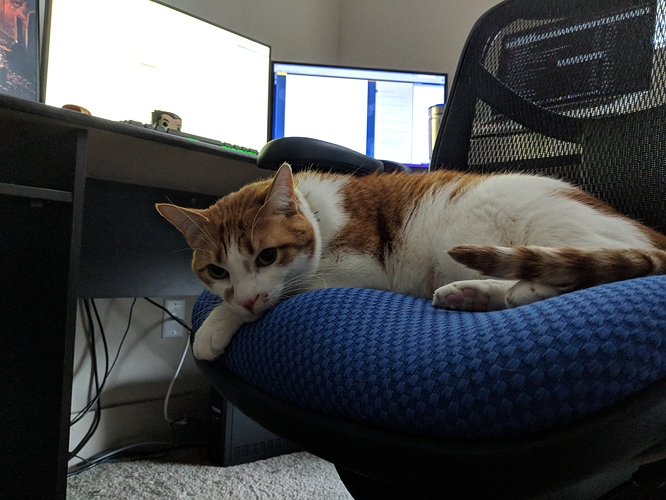 The server/network area is behind me and is currently under construction. I can show pics, but it ain’t pretty

The server/network area is behind me and is currently under construction. I can show pics, but it ain’t pretty

oh I love network setups and would like to see it, it can’t be any worse than mine is right now XD

oh I love network setups and would like to see it, it can’t be any worse than mine is right now XD

Backstory: My 30u rack broke in the move 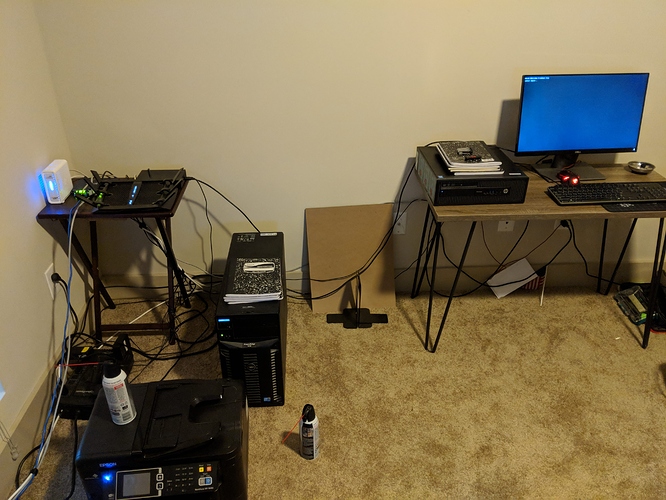 Also in screen is Dell T410 and old Epson printer

Dell T410 is a KVM host (Debian Stretch) that runs my entire network right now. DHCP, DNS, test boxes (I have a podcast site, a personal portfolio site, and some projects I’m expanding on), and some crazy stuff (Windows server + LDAP + Kubernetes + random tech). Off screen is my Ryzen 2600 build (Fedora 28 Server/Minimal edition) and another Dell server that is an experimental box. I just took FreeBSD off of it because, despite my burning curiosity, I was slowing down due to having to learn aspects of the system that are dramatically different than what I’m used to (like the Bhyve and Xen hypervisors, for instance).

Everything is connected to a CyberPower UPS

Once I get another rack I’m going to setup the room properly. That temporary table is going to get gone, I’ll have a place for the rack servers and my actual switch, plus the T410 won’t be on carpet

Thats quite the setup you’ve got there and certainly has some uh character to it, you’ll have to show us the transformation once you’ve got it all setup properly

Here’s mine, I’ll admit you have me a little outdone in the cringe department.

Bottom is server running CentOS and is mostly hosting this forum as well as a few little things like nextcloud, remote file storage, etc above that is my pfSense router, then my switch and patch panel all tied together with an Ikea Lack table, machine on the top is also my old 4690k system that is either used for testing or if I want to use a computer downstairs.