them asking for buy my hat

whatever they offered it wasn’t worth it, I do really like this hat XD

I don’t really want to install Epic only because it attempts to save a local copy of your steam friends and recently played games.

I still need to get on testing that.

Neat. No idea if this is a mod/admin thing 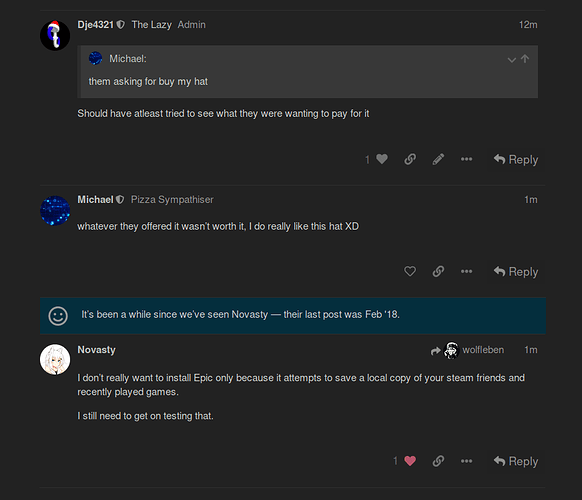 My recently added bookmark in red:

Neat. These 2 posts will catch you up on whats been going on

New Domain We are switch domains over to forum.0cd.xyz. This will be happening when we do the server maintenance to migrate existing data to point to the new domain. Right now 0cd.xyz will redirect to forum.0cd.xyz. There will also be a mass email going out after the domain move to update all users on the new domain. Landing Page There will also be a landing page setup on 0cd.xyz that will point to various parts of the forum, highlighting great topics and just explaining who we are and what we…

Caveman is stepping down as admin and @lancec19 is pulling the domain along with the name from the forum. As such we are left in a situation with no domain or name to call ourselves. This is where the community comes in. We are having a community contest to come up with a new name to call this place. Please post your submissions below, a custom badge along with regular status will be given as an award for the winning submission. Name must be clean to be eligible for the prize. Winner will be pi…

Is this a stock discourse install?

Yes. Need to reinstall a few plugins (Staff notes, BBcode, and a few others)

Interesting, dayum that happened during a stressful event for me.

I’ve already opted in to both. 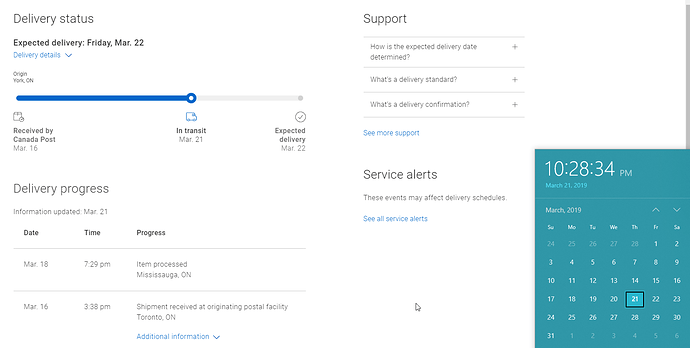 I honestly believe those concerns are valid. I can’t test for it because my Epic launcher is a dev build [cause I test for epic Unreal Engine] and I have no way of knowing if my version is the same or not. Epic has made some big misteps and they haven’t addressed the concerns really.

I’ve contacted my contact at Epic but I haven’t gotten anything back yet.

Supernatural is ending with Season 15

Supernatural Isn't Immortal After All, and Will End With Season 15

Seems like just yesterday that we were cracking wise about the inevitable renewal of CW mainstay Supernatural, but lo, the show that aired its first episode in September 2005—the long-ago era of President George W. Bush, Batman Begins, and “Hollaback...

I okay with this. It has had a fun long run. I’ll also be able to watch the seasons on bluray [I own all the ones that are out] and it is great for rewatch.

I finally got my warranty replacement for my broken controller after 5 and a half weeks. I would complain about the long time I had to wait, but considering if I had bought a first party pro controller I wouldn’t have even been able to get a replacement.

It should have ended with season 5.
Anything past that is an insult to the show.

I consider everything after 5 as fluff. Some of the fluff is entertaining and good. Others were okay. But yeah season 1 to 5 are the only seasons that need to be watched.

I finished my 3rd replay of Dragon Age Inquisition. This game takes a a bit to replay. There is way too much dead areas [nothing happening, traveling]. I still believe the level designs are poorly designed. Now I can focus on replay of KOTOR, Granted won’t be doing too much replay. I’ll be focused on other things.