ye CSS is a good skill to learn, its probably stupid simple 2 character edit to fix too, its finding that needle in the heystack lol

that’s the bitch, probably just as simple as removing the background-color tag from this element XD 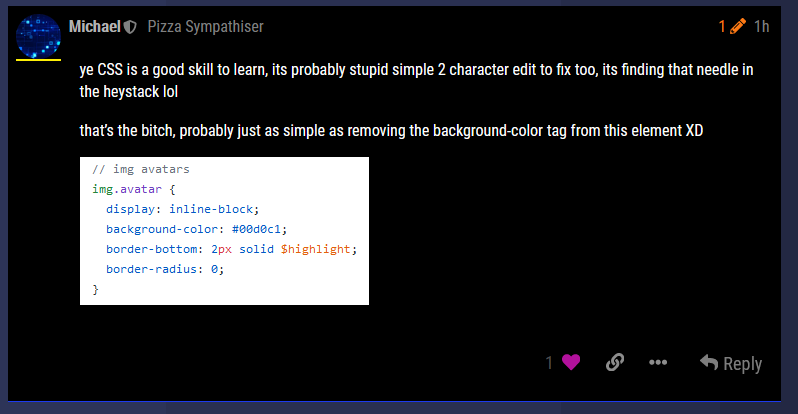 figure as much. all it is doing was adding that weird green colour as the background so that it only shows up on avatar’s with a transparecy, it had have been intentional too it just looks soo bad lol

filling out a PR for it already XD

I have tomorrow off. Monday though back to work through Tuesday then then I go on a much needed and earned 7 day break. 5 of those are paid time off.
What will I do on my day off tomorrow - I honestly don’t know. Probably a marathon of films.

What is this? This is a server that lets you experience how minecraft has aged over the past 10+ years in near real time. We start as far back as we possibly can where multiplayer is decently stable and we slowly update the game as if it was getting major releases every couple of weeks instead of every couple of months. What versions will we follow? We are starting at Beta 1.2 and will be following each major release until we catch up to the modern version of minecraft (probably release 1.17)…

I know what you are thinking what about Matt Smith and Peter Capaldia runs? Well I plan to get those on Blu Ray too… but man those Seasons on Blu Ray are expensive. Not Aniplex Expensive though. Hoping a reasonable price collection comes out for those two with the specials included. I happen to enjoy Matt Smith as the Doctor. Technically I do have these on DVD… but Blu Ray is better for Digitizing.

i made a purple theme

called purple-darker. its neat, if you like that kind of thing:

Im glad you had a fun christmas. I stayed home and smoked

Got my brother a new monitor. Nice swanky 1440p monitor that has actual color reproduction instead of the TV he’s using.

It died after 6 hours of use. T_T Thanks, Jeff.

It died after 6 hours of use. T_T Thanks, Jeff. 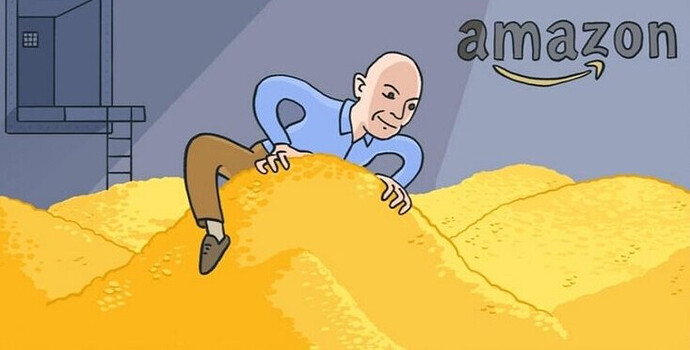 Lmao we smoke and dabbed out fiancés parents lmaoooooooo

The Ongoing Digitizing of Film and TV for my Plex machine Project:
I’ve been working on this in my Spare time since about September. I’m only a couple of weeks away from being done with the films. Setting the Film in maintenance mode. IE - I only have to digitize when I buy.
Television isn’t at the point yet. Honestly I don’t think it will be till either Spring or Summer Depending on a few things.
One neat thing I learned how to do with Plex was how to make collections: 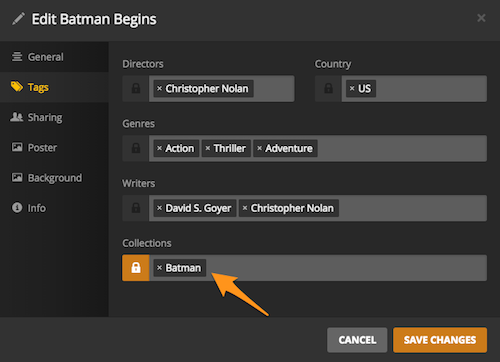 Collections let you gather related movies, TV shows, and artists or albums for music together. For example, you might add...

Short version: Your creating a Tag for the Collection and then Plex groups it with other things you put on that tag. You do have to get a Poster for the collection, if you want it neater but those are easy to get from the IMBD. I do need to make a default black background for my own various collections.

Overall pretty pleased with the progress I made on it.

i cried over jackie

Fuck this game hit me again

isnt that the non comical brucie from gta4 but unlike in gta4 you cant just hangup on him?

is my lib a many year prison sentence or is this the same as buying a car and seeing it has a thing of cd’s in the back as well?

If the media industry has a say in it. Owning music would be piracy!

The whole digital thing is messed up anyway. Pirating is not stealing. I made a copy. You still have it and now so i. Intent would play a huge role. Did you intend to ever watch these movies?